‘In his editorial New Rule, Bill calls for collective action to save the environment and fight the scourge of pests and pollution … ‘

“I have no country to fight for; my country is the earth; I am a citizen of the world.” —Eugene Debs

EUGENE VICTOR DEBS (1855-1926) was one of the greatest and most articulate advocates of workers’ power to have ever lived. During the early years of the 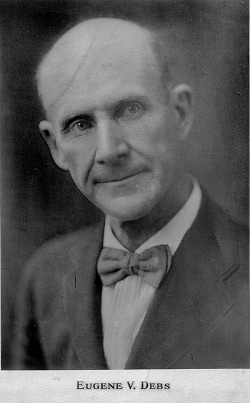 labor movement in the United States, Debs was far ahead of his times, leading the formation of the American Railway Union (ARU) and the American Socialist Party.

‘Instead of providing a certain amount of money per month on an EBT card, millions will receive half their former benefits in the form of a “USDA foods package”, which will include “shelf-stable milk, ready to eat cereals, pasta, peanut butter, beans and canned fruit and vegetables”…. ‘

The world is full of misery and conflict, destructive brutality, aggression. Man has mastered the external world but inwardly he is still violent, acquisitive, competitive. Society has been built along these lines. The crisis in the world is actually a crisis in consciousness. It is important to bring about a revolution in the human mind. “What we are trying, in all these discussions and talks here, is to see if we cannot radically bring about a transformation of the mind. Not accept things as they are. Nor revolt against it – revolt doesn’t answer a thing! But to understand it, to go into it, to examine it; give your heart and your mind with everything that you have to find out a way of living differently.”

8. The end of conflict

These eight programmes were produced and broadcast in America by the National Educational Television Network. They represent the earliest sound films of Krishnamurti speaking to audiences – it was the first time that he had allowed his talks and discussion groups to be filmed. The principle settings are the Oak Grove in Ojai, California, and the Thacher School in the Ojai Valley.

‘There is a significant source of volcanic heat deep under the fast-melting Pine Island Ice Shelf in Western Antarctica, researchers found, after stumbling on the evidence while studying heat transfer in the icy continent’s oceans … ‘

“Climate change is causing the bulk of glacial melt that we observe, and this newly discovered source of heat is having an as-yet undetermined effect, because we do not know how this heat is distributed beneath the ice sheet.”

Live in Brooklyn: Legendary reporter Seymour Hersh shares what he thinks of Donald Trump, his analysis of the Trump-Russia story, and some wild stories from his new memoir, “Reporter.”

ACLU attorney Lee Gelernt recounts the latest on the immigrant families that are being ripped apart and separated indefinitely, and shares personal stories of the victims he represents in a nationwide class-action suit against the Trump administration.

Activist Mariame Kaba explains the historical foundations of the American carceral state and calls for the abolition of ICE and the prison-industrial complex.

“When we can’t dream any longer we die.”

‘Ocasio-Cortez is one of the most progressive, uncompromising candidates to make it to the general election as a Democrat and the fact that she beat an entrenched machine politician has propelled her to instant national recognition. She’s also spoken out on Israel’s crimes against Palestinians, labeling a recent massacre for what it was, putting her at direct odds with much of the institutional Democratic leadership.’

In the wealthiest nation in the world, working families shouldn’t have to struggle. It’s time for a New York that’s good for the many. I am an educator, organizer, Democratic Socialist, and born-and-raised New Yorker running to champion working families in Congress. It is well past time that we in NY-14 had a true, lobbyist-free representative who lives in our community and fights on behalf of Bronx + Queens families. This movement for Congress is about education and healthcare; it’s about housing, jobs, justice, and civil rights. It’s is about preparing for the future of our environment, energy, and infrastructure. It’s about championing the dignity of our neighbors. And it’s about getting money out of politics.

That up-front referencing of her democratic socialism signaled that Ocasio-Cortez is a different kind of candidate. She makes no apologies for her ideology.

The only thing more uplifting than @Ocasio2018's victory was her victory speech pic.twitter.com/47Qd2pKi3N

Bits and Pieces
Create a free website or blog at WordPress.com.